Mysteries in the Minute Books

I have been wondering lately how words –– not simply the ideas conveyed by them –– but the physical way words are put onto a page, can tell a story.

In our increasingly paperless age, it's easy to forget how important the ability to write once was.  During the 18th century, with more and more people gaining access to pens, paper and learning to read, letter writing became all the rage.  It's no coincidence that the epistolary novel –– entire 800 pagers written as a series of letters from different characters –– became so popular.  Just flip through one of Samuel Richardson's novels (I wouldn't attempt reading them, however, unless you have a lot of extra time on your hands) and it quickly becomes apparent that not only the content of letters, but also their execution –– the handwriting, the pens, the paper –– said a whole lot about your social status.

What does this have to do with the subject of my most recent musings: 18th century London eating clubs?  Well, what I love about handling these minute books is that, in doing so, I can appreciate how precious they were to these respective clubs.  Notes are often scribbled in margins to save space.  Buying a new book was always dutifully recorded in expense reports.  For example, the Wednesday's Club included this note in its minute book:

"Mr Treasurer Bate was requested to have a new minute book prepared to be ready for this society against the commencement of the new century 1800, the present book having been in use upwards of One Hundred Years."

"The Ancient Register of the Club at the Half Moon Tavern, London, was new bound in the year 1780, when Henry Cranke, Esq, auditor of Bridewell and Bethlam Hospitals, was High Steward."

Given that the ability to transcribe events was so important, we must take particular notice, then, when written records don't look so pretty.  I was looking at the Wednesday's Club minute book the other day –– a heavy leather-bound volume of records from 1687 to 1815 –– and one page in particular caught my eye as unusual. 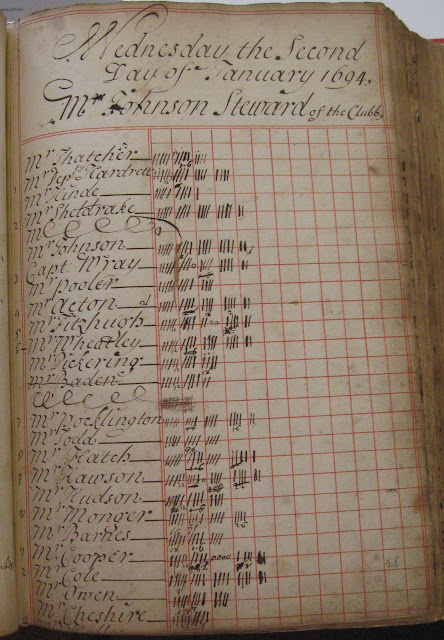 What is going on here?  Given that the Wednesday's Club was so meticulous about keeping its attendance records, I was surprised to find that this one from 1694 was so ... well ... unfinished.  Why do the records just stop in April?  Did the club simply cease to meet?  Did these guys have a fight?  A falling out?  And what's up with the squiggles and crossed out names?

It might not look like much, dear readers, but I suspect that this unfinished record bespeaks some kind of larger conflict among the club's members, the origins of which I am determined to investigate.  I'll report my findings in the next post.
Posted by Unknown at 09:52 1 comment:

Getting Sloshed with Mr. Steward

There is a card game that the Authoress of this Blog used to quite enjoy playing back in her college days.  Cursed with the rather indecorous name of "Asshole," the game was, essentially, a race to get rid of one's cards first and become the "President," where one could invoke a series of self-serving and arbitrary rules upon the other players.

The rest of the players would continue to get rid of their cards until the last man to hold a card was declared the "Asshole." This unfortunate player would not only have to forfeit his or her best cards to the President in future games, but would also be coerced into a series of symbolically degrading rituals.  (The most common of these was having to drink large quantities of very cheap and unpalatable canned beer.)

But where did this game originate?  Where did the rules come from?  In the past few days, I have been looking at the rules inscribed in two 18th century club minute books  –– those belonging to the Wednesday's Club and the Centenary Club –– and I was struck by their similarities.  Indeed, it appears as if the social dynamics suggested by these club rules shared many of the same traits as this ubiquitous 21st century college drinking game.

I'll point out a few examples...

Egotistical yet unproductive rules enacted to coddle the President's ego and reaffirm the status quo were in full force.  The Wednesday's club rule book declares  "if any member of this clubb shall during the time of the clubb call the steward by any office other than Mr. Steward, such members shall for every offense forfeit and pay to the steward for the use of this Society 6 pence."  (This rule is very frequently enacted by 21st century college-age "Presidents.")

The injunction to drink (or not to drink) becomes the prerogative of the President.  For example, "in case any member of this society shall talke, or otherwise interrupt the steward or his deputy during the time the names of the members of this society are calling over, such member shall forfeit and pay to the steward for the time being for the the use of the society for every such offense 3d."

Indeed, the level of drunkenness among members was strictly policed by the President, who also controlled who, when and to whom toasts were raised.  Further, "Any member that shall at any time during the club come to be disordered by drinke," the Centenary Club's rule-book stated, "shall forfeit 6d."  Bringing a drunk friend cost a shilling.  As I read on in the minute book, however, the antics of the members made it clear that the club took a very liberal view of drunkenness.

None of these rules and penalties –– either then or now –– carried any real meaning.  These assertions of status and hierarchy are purely symbolic, holding true only among the participants in a clearly demarcated space and time.

Yet the fact that two distinct 18th century social clubs ascribed to "rules" that are so similar to those espoused by boisterous college students today is thought-provoking.  Historical distance from our objects of inquiry can easily fool us into attributing more profundity to the purpose of these clubs than they really deserve.  Indeed, I'm finding that, for many of them, the professed agenda amounted to little other than a night of laughs and intoxication.
Posted by Unknown at 17:32 3 comments:

A Predilection for (Food) Collection

As this Blog enters its seventh month of existence, my wise and efficacious readers most likely have gathered that the records of the Royal Society's semi-official dining club, "The Thursday's Club called the Royal Philosophers," have proven essential to the Lady of Quality's dissertation research.  Indeed, for 38 years –– from 1748 through 1785 –– this club assiduously recorded everything the members ate for dinner, from "Beef-Stake Pye" all the way down to the butter and cheese.

But alas.  In 1786, for some unknown reason, the treasurer ceased to record the 'Bill of Fare' in the dinner books.  (However, he unflaggingly continued to keep the attendance records for years.)

Why?  Did the Bill of Fare no longer matter to him?

In Annals of the Royal Society Club, published in 1917,  Sir Archibald Geikie attributes this unfortunate event to mere happenstance, proclaiming the two minutes of extra work being "too much for the increasingly feeble fingers of the devoted treasurer."

But I'm skeptical.  After all, the treasurer's hand-writing post-1786 resembles that of a man in perfectly good health (even for a physician, no less).  Thus, noble readers, I here propose an alternative explanation.  The 'Bill of Fare' ceased to be recorded in 1786 because it was no longer integral to the club's identity.

I implore you, noble reader, to hear me out.

First, what we think of as "scientific research" today was, during the 18th century, heavily intertwined with the practice of antiquarian collecting (read more about it in my last post.)   Writing down what was eaten every week was an act of empirical observation.  When "chines of beef" were donated to the club, the treasurer would always weigh and measure them, duly recording his findings in the dinner books.  This zest for documentation also extended to the flavors of different foods.  For a bunch of guys who were trying exotic fruits for the very first time, the collective consensus that the flavor of cantaloupe was "equal if not superior to pine apple," was not just a piece of subjective whimsy.  It was a serious attempt to deduce standards of taste.  "Science" wasn't done in labs in those days; it was practiced in places like taverns and coffee-houses.  And more often than not, people would experiment on themselves.

But not only was the 'Bill of Fare' a matter of empirical observation; it also forged a "common taste" shared among the members.  I have already mentioned that members of the Thursday's Club did not all share the same social rank.  Sure, all of them were well-off by the standards of the day, but they could range from nobles to apothecaries, from politicians to poets.  By writing down everything that they ate, they were proclaiming to the world, and to posterity, that they were men who were cosmopolitan enough to know what a pineapple tasted like, but preferred the English "Apple Pye" to all other sweets.  They were men who happily dined on "Calves Head Hashed" and "Tongues and Udders," but disdained suspiciously French "Fricassees."  They were men who, by means of their urban street-smarts and savoir-faire, could dine on twenty different kinds of fresh fish and have cauliflowers in winter.

By 1786, the Bill of Fare no longer performed the same scientific and social "work" that it once did.  Antiquarian collecting was losing relevance as the principal means of organizing knowledge.  And pineapples and cantaloupes were no longer complete edible novelties to those who could afford them.

In the 19th century, we start getting the menu with all of its a la carte options.  But the 18th century 'Bill of Fare' was an entirely different beast.
Posted by Unknown at 12:26 3 comments: