The Best Vegetable of the Salad Kind

When it comes to history of the early modern salad, F.R.S. John Evelyn usually gets most of the attention.  Famous for his vegetable friendly cookery book, Acetaria: A Discourse of Sallets (1699) he helped define the salad as "certain Esculent Plants and Herbs, improv'd by Culture, Industry, and Art of the Gard'ner ... to be eaten Raw or Green, Blanch'd or Candied..."

Don't get me wrong; Acetaria is a fine piece of work.  He even teaches you how to make salad dressing: "the Yolks of fresh and new-laid Eggs, boil'd moderately hard, to be mingl'd and mash'd with the Mustard, Oyl, and Vinegar."  Little different, Reader, from the dressings I throw together today.  And in case you are unsure just how to plate the salad at your next dinner party, Evelyn has you covered.  "That the Saladiere, (Sallet-Dishes) be of Porcelane, or of the Holland-Delft-Ware; neither too deep nor shallow..."

But Evelyn was hardly the only intellectual to pay attention to the vegetable kingdom.

I noticed a gentleman by the name of Philip Miller who began to attend dinners of the Thursday's Club in the Spring of 1752.  He dined with the club frequently, attending two to three dinners a month on average.  But he was always noted down as a "visitor."  Of whom?  I wondered.  Where did he come from?

Apparently, Miller was anxious to please.  For three consecutive weeks during the summer of 1753, Mr. Miller entertained the club with Aegyptian lettuces.  What did this mean? 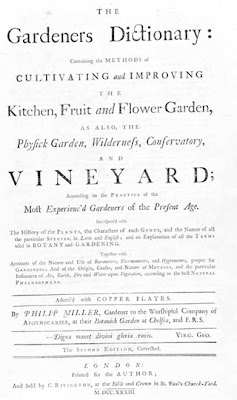 Apparently Miller had some serious botanical connections.  He had been appointed chief gardener to the Chelsea Physic Garden since 1722.  This garden, founded in 1673, was designed for the purpose of growing new medicinal herbs and plants.  In fact, written into the garden's lease was the requirement that the garden provide 50 seedling samples to the Royal Society each year, until the total of 1000 had been provided.  Miller excelled at this task.

Philip Miller also authored the widely-read The Gardener's Dictionary, which classified 14 different kinds of lettuce, ranging from the "common garden" varieties to progressively more exotic and esteemed "Silesia" "Aleppo" and "Black Cos."  Lettuces were valued in those days for their delicate qualities; coarser varieties, Miller attested, were only appropriate for "stewing rather than salleting."

I enjoyed flipping through this manual, as it provides a nice glimpse into the tastes of contemporary Londoners as set apart from the rest of the kingdom.  "The most valuable of all the Sorts of Lettuces in England are the Versailles, the Silesia, and Cos," Miller claims, "tho' some People are very fond of the Royal and Imperial Lettuces; but they seldom sell so well in the London Markets as the other, nor are so generally esteem'd.

Guess Miller's expertise worked in his favor; he was elected a full-time member in July of 1753.  The minute book noted, however, that Miller hadn't exactly been a stranger all this time:

"Mr Phillip Miller having been an Antient Member of this Society but being out of Town when the regulation of the Society was made in 1749 and having Applyed as a Candidate ever since June 1752 it was unanimously Agreed that the present Vacancy should be supplyed."


I don't know about you, Reader, but for me, there's a touch of melancholy to this story.  Once content to go out and share a meal with his friends and colleagues, Miller must have been slightly taken aback to return from "out of town, " only to be coldly greeted as a "visitor," and then be pushed to the margins of the coterie for an entire year.  Sounds pretty harsh.

What provoked the need for these men to institutionalize their weekly meals, to demarcate for them a specific time and place?  And how did the formation of clubs affect friendships, acquaintance networks, the unspoken protocols of social life?  For Philip Miller was not unlike an English Rip van Winkle.  Time passes in his absence, and he eventually wakes up groggy and slightly baffled, forced to face the consequences of falling too long asleep.
Posted by Unknown at 15:19 1 comment:

Email ThisBlogThis!Share to TwitterShare to FacebookShare to Pinterest
Labels: Cookery, The Thursday's Club

By Porter and Limonade Inspir'd

Zounds!  A Dearth of recent Updates might have led my worthy Readers to believe that the Lady of Quality hath forever abandoned her Researches into the Tastes and Appetites of 18th Century Britons.  And although I entertain little Doubt that my inquisitive and efficacious Readers have had far more worthwhile Businesses on their Minds than to await the Thoughts and Opinions of this Blog's humble Authoress, I assure my Readers that from hereafter I shall endeavor to ensure that dreaded Grant Proposals and Dissertation-Writing will not, in the future, interfere with the Regularity of my Posts.

And since today the sun shines upon the Fertile-Grounds Coffee-House in the Eastern Bay, where the Lady of Quality presently writes, I was pleased to notice that this Coffee-House offered several pleasant cold drinks to regale the Palate.  Reader, I ordered a Lemonade.

Lemonade, or "Limonade" was hardly unknown in 18th century Britain.  Even my beloved Thursday's Club –– the elite dinner club to which botanists, physicians, and other sundry Royal Society virtuosi subscribed –– was familiar with this refreshing drink.

While the original club rules only made provisions for wine, an amended rule in 1760 reflected these evolving tastes:

NB: As many of the Gentleman chose to drink Limonade, and Porter, the Treasurer always estimated these liquors at Equal in value to a bottle of wine, and paid 2 shillings in every reckoning for them, whatever numbers the company was.

Today's lemonade is rather simple –– nothing but a simple concoction of lemon juice, water, and sugar –– consumed on lazy summer days to quench one's thirst.  But I wondered what this early modern "Limonade" really entailed.

Seems like the same 'quenching properties' of lemonade were recognized then as now, although 18th century physicians tended to give it a decidedly medicinal flair.  The French physician Samuel-Auguste Tissot, for example, proposed it as a potential remedy to "malignant fevers" and "strokes in the sun,"calling it "the best drink in this disorder."  But in the case of a lemon scarcity, "Water and Vinegar" was deemed an appropriate substitute.  Hmm.

But what about the Porter?  In the 18th century, this too was known as a peculiar London novelty beverage.  Contemporary recipes list a host of ingredients essential to brewing a good batch, ranging from Cinnamon to Liquorice Root, and from Treacle and "India Berries."

Although I've seen a handful of "Porter-Lemonade" concoctions –– sometimes described as a variation of the "Shandy" for sale at upscale modern British pubs –– I was not certain whether the custom was alive at this point in the 18th century.  It didn't take long, however, until my researches led me to discover yet another 18th century club: "The Robin Hood Society."  Seems like these guys had a particular penchant for the two drinks, either consumed separately or as a mixture.

"It is observable," wrote one satirist, "that among the Orators of this Society, those who quaff Porter, generally speak with great Gravity, unmeaning and solemnity, and un-interrupted dullness; while, on the other hand, those who drink Lemonade are impertinently witty, unseasonable smart, and acutely ridiculous. (1764)

Who knew that porter and lemonade were perceived to be so beneficial to the arts of elocution?  Normally you'd think a simple shot of liquid courage would do the trick.  But yet another satire remarked, "The writings of different authors have been compared to wines: but the orations delivered here can be resembled to nothing so properly as the liquors of the Society; for while they are once so weighty and so sharp, they seem to be an equal mixture of porter and lemonade." (1755)


It is rather remarkable that the Thursday's Club seemed to announce its members' preferences for porter and lemonade at the exact same time that the literature about the Robin Hoods was first popping up.  One would think, therefore, that these two drinks were most likely valued by members of the Thursday's Club who wished to present themselves as cultured, health-conscious and progressive individuals thirsty for a lively intellectual debate without the soporific qualities induced by wine.