Ever wondered when and where the modern restaurant review got started?

In 18th century London, there weren't really restaurants, but eating establishments of all shapes and sizes –– taverns, coffee-houses, inns and cookshops –– abounded.  And while you couldn't exactly stop in all of these places and order a la carte, the fare offered could be incredibly sophisticated, and many taverns became renowned for their talented cooks.

In fact, in the same way that Spago launched the celebrity of Wolfgang Puck in the early 1980s, or French Laundry is today intertwined with the celebrity of Thomas Keller, the cook was integral to a tavern's culinary reputation.   English cooks even wrote cookery books, which always mentioned the well-known tavern where they were employed.

Yet the modern restaurant review that attempts to be objective and useful to patrons, the kind that we read in newspapers and blogs today, was quite a different beast.  In 1788, however, I found such a review in the monthly New London Magazine.  And not only did the magazine run it once, but these reviews were featured for not one, not two, but three consecutive months!

Here they are ... plotted on a modern day map: 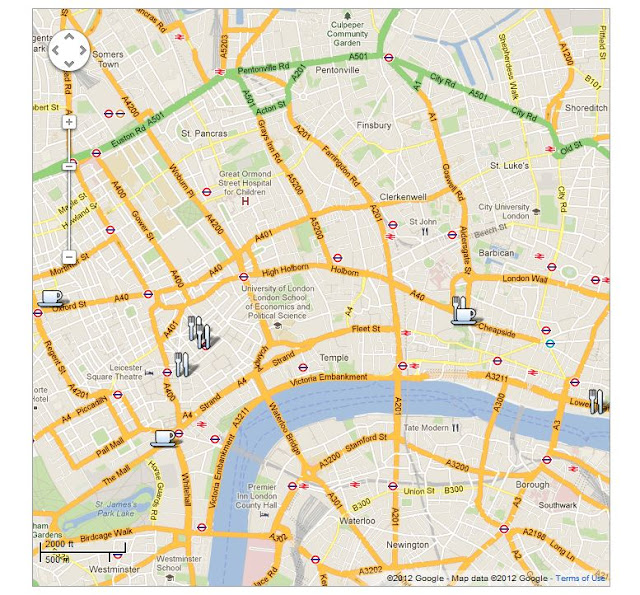 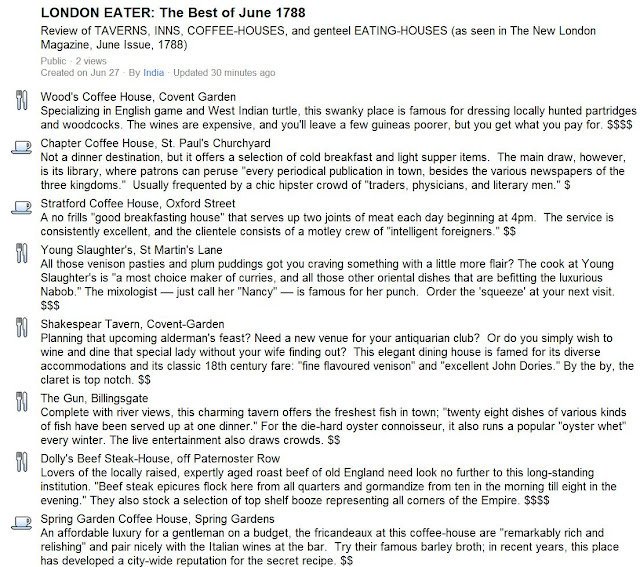 Obviously I'm not terrible surprised by the inclusion of Wood's and Dolly's: the places I've run across in 18th century literature.  But I'm surprised that so many less expensive and less assuming places are included.  Who knew that home-made barley broth could be a chic Enlightenment treat?

Stay tuned, loyal readers, for there will be more in July.
Posted by Unknown at 20:35 1 comment:

Email ThisBlogThis!Share to TwitterShare to FacebookShare to Pinterest
Labels: Foodies

To the Curious in Fish Sauce...

On August 12 1784, Faujas de St Fond, a respected French geologist, was invited to dine with the Royal Philosophers, the elite London dining club composed of British scientists and intellectuals.  He wasn't terribly impressed.  In his memoirs, he disdainfully observed the bad flavor of the coffee and the lack of napkins.  (Messy English tables were apparently common complaints among "enlightened" French visitors.  Faujas's famous contemporary, Arthur Young, remarked that "dining without napkins seems ridiculous to a Frenchman, but in England we dine at tables of people of tolerable fortune without them.")
When it came to the food, our French visitor seemed slightly more bewildered.  "The dishes were of the solid kind, he recalled, "such as roast beef, boiled beef and mutton prepared in various ways, with [an] abundance of potatoes and other vegetables, which each person seasoned as he pleased with the different sauces which were placed on the table in bottles of various shapes."  The poor guy, however, had no idea what, exactly, these bottles contained, and his account makes it pretty clear that he didn't exactly eat very heartily that night.  "The dinner, he concluded, "was truly in the English style."

What was in those bottles?  While the bill of fare from that afternoon (listed above) recorded boiled chicken, roast mutton, veal cutlets, a minced lamb's head, and yes, potatoes, no sauces are mentioned.  This is not an uncommon dilemma in culinary history.  While one needn't look very long in order to find various literary and cultural references to "sir loyns" of beef or haunches of venison, I've had a lot more trouble discerning attitudes towards the hot condiments of the age: "Zoobditty Match" –– a popular East India fish sauce –– and "Sauce Cherokee" from North America.

We do know, however, that these various condiments were both well-known and relatively standardized by the turn of the century.  In fact, the authenticity of a particular condiment became the subject of a well-publicized lawsuit in 1814, when James Cocks sued a London oilman for replicating his celebrated Reading Sauce and passing it off as his own.  Cocks' sauce, invented "twelve years earlier" and named after his small town on the Thames (about 50 miles west of London) was a fish sauce that paired with fish, game and cold meat.  At the time of the lawsuit, Cocks' brand was sold by about 100 different retailers from London to Edinburgh, from Oxford to Dublin.

The fact that a lawsuit even happened tells us that as much as metropolitan Londoners wanted curry powder from Bengal and genuine pepper from Cayenne, this didn't put a damper on the demand for authentic regional condiments.  By the turn of the 19th century, the average London oilman (a seller of preserved condiments and other goodies) acted as a one-stop shop for all of these things, hawking India soy and Gorgona anchovy paste next to genuine Stilton cheese. 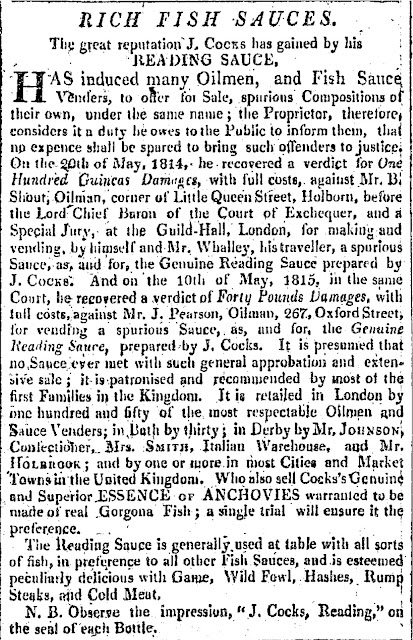 To determine the outcome of the case, the judge assembled a panel of witnesses from Dover, Taunton, Chichester and London.  All of them claimed that the London version was far inferior to the 'real' Reading version, the former apparently "being thick, and leaving a sediment" and "bringing great dissatisfaction to the parties who purchased it." (Sadly, no blind tasting occurred.)  Regardless, James Cocks ended up winning 100 guineas in damages.  This was certainly nothing to sneeze at in those days, but perhaps the most lucrative aspect of his victory was the fact that he could use it as the basis of a future advertising campaign (here's an example to the left).

So the authentic flavor of Reading, England –– a product demarcating a geographical region rather than an individual or an idea –– was not a centuries old artisanal tradition only uprooted in the 18th century, but was consciously invented and marketed as a local product by a savvy retailer.  But even so, the considerable interest that this case piqued in the reading public (I've found record of it printed in at least six or seven newspapers) makes plain that Englishmen cared a great deal that they were getting the real thing.
Posted by Unknown at 14:15 1 comment: