In my last post, I mentioned a peculiar breed of 18th century cookery books that catered to primarily to vegetable lovers.  Or did they?  For I fear, goodly reader, that many of these self-professed Pythagoreans delighted in vegetables more so out of necessity rather than out of hatred of beef-stake pyes and harricos of mutton.  Nope, meat didn't come cheap in those days.  But what were these cookery books all about?  Who read them?  What kinds of knowledge did they impart? 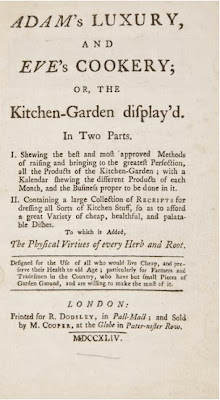 We know that they were remarkably savvy when it came to marketing themselves to target demographics.

"This little Treatise of Kitchen-Gardening is chiefly design'd for the Instruction and Benefit of Country People," opens the vegetable friendly Adam's Luxury and Eve's Cookery (1744) "who most of them have a little Garden spot belonging to their House, and at the same time let it lie useless, for want of knowing how properly to manage it..."

You've guessed it, reader.  The cookery book to the left isn't exactly in the same league as the botanical virtuoso Philip Miller's The Gardener's Dictionary ––  which I've discussed in previous posts.  No "Aegyptian Lettuces" or fancy cantaloupes discussed in this text.  To the contrary, this is much closer  to an early modern "Gardening for Dummies."  The section on "Melon," for example, pooh poohs the idea of enumerating all sorts of this fruit, as "there being annually new Sorts brought from abroad, a great many of which prove good for little."  Hmmmph.  Good old utility trumped exotic tastes.

While the first portion of the book explains how to cultivate a host of different vegetables and herbs at home, the remainder devotes itself to simple recipes that one could whip up in a minimal amount of time.  Flipping through the (electronic) pages yesterday evening, my appetite was piqued by recipe below: 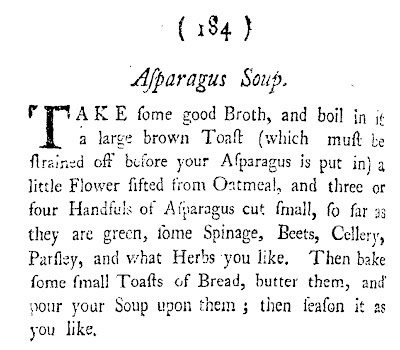 Asparagus, you say?  Once considered a socially exclusive treat, the Enlightenment actually witnessed great strides in the democratization of this particular vegetable.  In 1727, Stephen Switzer, one of the most well-known horticulturists of the era, gushed over the considerable improvements made in the art of Salleting, pointing out that "the raising of the asparagus and artichoke, especially the first, has been the most advanced of any one vegetable the garden produces." He reveled in the fact that Britons could now enjoy them as late as Christmas, and that they were "near as green and as good as that which comes by nature."
Switzer's enthusiasm was infectious.  By the time I had finished the preface of his The Practical Kitchen Gardener, he was proclaiming visions of "asparagus piercing the ground in a thousand places," exclaiming:

"these! these! are the innocent and natural dainties, where they present themselves and grow for the nourishment and the delicious entertainment of mankind."

Time to start that asparagus soup.  I'll be the first to admit, however, that I didn't follow the above recipe to the letter.  I liked the idea of cooking a bunch of different green vegetables together (this is common in many 18th century soups) but I didn't include the beets, for I feared they would muddy the bright green color of the soup.  I also skipped the flour, since I wasn't really worried about the thickness.  I also threw in some leeks and shallots, and topped it off with creme fraiche and toasted pine-nuts.

My noble Readers should be informed that I greatly enjoyed this modest meal, and found it relatively healthful as well as pleasing to the palate.  Who says that the flavors of 18th century Britain can't occasionally be inspired by a 21st century San Francisco sensibility?
Posted by Unknown at 11:00 1 comment:

Virtue and the Vegetable circa 1741

Amidst the pidgeon pies, the shoulders of mutton, and the hindquarters of beef, I have noticed, dear Readers, that I have neglected the "Pythagoreans" –– very small minority of 18th century Britons who chose to abstain from meat.

Like I said, this was a very small minority.  The majority of so-called "vegetarian" cookery books advertised vegetables as substitutes for those who could not afford meat.  If you came into a few extra shillings, throw in, by all means, the veal cutlets/beef bones/tongues and udders, etcetera.

At the Huntington Library today, I ran across two rather strange references from the famous 18th century socialite and taste-maker, Elizabeth Montagu.  (Read my previous post about her eating habits here.)

On May 5, 1741, at the age of 23, she remarked that she hoped an acquaintance "may not get the cholick with his vegetable diet, as it turns to vanity and wind he will be too much puff'd up with it."


Like most people acquainted with the pleasures of a good steak, young Elizabeth seemed pretty skeptical about the virtues of vegetarianism.  I mean, this is coming from someone who grumbled having her dinner hosts dump an additional side of spinach on her plate after she helped herself to a second slice of lamb.  Indeed, this is coming from someone who enjoyed "2 dishes of chocolate" (recommended by her physician) for breakfast.  But only a week or so later, she seems to have a change of heart.  In a letter penned to her BFF, Margaret Cavendish, she explains:

"Must I leave your Grace for such a trivial consideration as my Supper.  They have sent me some chicken, but alas!  Can one eat one's acquaintance?  These inoffensive companions of my retirement can I devour them?  How often I have lately admired the provident care and the maternal affection of a hen, and shall I eat her hopeful son or fair daughter!"

"Sure I should then be an unworthy member of the chicken society, I find myself reduced to a vegetable diet not as a Pythagorean, for fear of removing the soul of a friend, but to avoid destroying the body of an acquaintance.  There is not a sheep, a calf, a lamb, a goose, a hen, or a turkey in the neighborhood, with which I am not intimately acquainted ... I can never describe how nor tell why, but they look a little awfull, and pish and phoo with a dignity age will never give me, really it is droll..."

Should we see this as surprising?  After all, I don't know any girl who didn't flirt with vegetarianism at some point during her 20s (including the Authoress of this Blog). But who knew that such sentiments extended so far back in history?  And what accounts for this change of heart?  Did young Elizabeth remain wedded to Pythagorean virtues?
Posted by Unknown at 19:52 1 comment:

Email ThisBlogThis!Share to TwitterShare to FacebookShare to Pinterest
Labels: Taste

How to Talk to an Epicure

The eponymous "Foodie" is a controversial figure in the 21st century.  In some respects, it is a mark of cultivation, cosmopolitanism and social wherewithal.  The foodie is lauded and respected for his ability to detect a host of subtle nuances within a dish on shows like Top Chef and No Reservations.  Foodie-friendly events dealing with everything from beer to truffles to cheese are burgeoning around the globe.  Likewise, existence of scholarly organizations such as the Oxford Symposium on Cookery –– whereby panelists sometimes offer audience-members 'free samples' while presenting their papers –– testify to a rapprochement between the food studies as a dispassionate academic field and the sensuous cultivation of the palate.
On the other hand, spoofs of foodies –– their unpalatable elitism, their solipsistic world-weariness, their terribly self-indulgent blogging habits –– are constantly portrayed in the media as subjects of satire, spoofed on everything from Portlandia to The Simpsons.


What did people think about the "foodie" of 18th century England, if such a type even existed?  I'm only just beginning to research this topic, but it appears as if he was hardly any less controversial than today.  Scholars of 18th century Britain will know that contemporaries cast an equivocal eye upon connoisseurs of all sorts: "virtuosos" "collectors" and "dilettantes."  The "epicure" –– I use it here to mean indicate a connoisseur of food –– was anything but exempt.

Check out this issue of this 18th century periodical to the right.  This paper wasn't exactly serious business; but was widely circulated in London and was acknowledged to have "just views of the surface of life, and in a very sprightly manner."  You know the type of thing.  Beach reading.

Anyway, in 1756, an entire article was devoted to the travails of the bon-vivant.  "There are a sort of men," remarks the author, "whose chief pride is a good taste (as they call it) and a great stomach: and the whole business of their lives is included in their breakfast, dinner and supper."

But that's not all.  He goes on to describe a gentleman (aptly named "Mr Cramwell") who boasts of chairing a dining club.  The sole criterion of membership?  All it took was the happenstance to work for a trade that allowed each member to procure the most elite and utterly delectable edible treats for the table.  A country squire supplied the game, a captain of a ship trading to the West Indies was contracted to bring a "sufficient cargo of turtle every voyage," and a Flanderkin Bird-Merchant enabled the club to feast on "Ortolans as plenty as pidgeons."

But what sort of qualities did this 18th century "epicure" possess?  The Connoisseur brings up three points:

1)  The 18th century epicure always seems to be male; in my research thus far, I have yet to run across a woman revealed to profess proclivities for fine food.  And while women gathered in salons (Elizabeth Montagu's coterie of Blue-Stockings being one of the most famous) the fare described was usually limited to tea and an assortment of light "dainties" hardly akin to the exquisite dinners enjoyed in all-male dining clubs convening in bustling London taverns.
2)  I had supposed that the epicure would be associated with the enterprising and urbane bourgeois rather than the titled nobility.  After all, cultivating "taste" was a rather radical thing in those days, a means for the socially astute self-made man to contest the court's rigid and sterile monopoly on culture  But not in the case of the epicure, it seems.  Indeed, the article suggests that foodie-ism was hardly an affliction of the well-to-do, but could be detected in men "of whatever rank and denomination, whether they regale themselves with turtle, or devour shoulders of mutton and peck-loaves for wagers, whether a Duke at White's, or a chairman at Blue-Posts..."
3)  Finally, while labeling oneself an "epicure" attempts to depart from the morally debased associations with gluttony, the author makes clear that the former was just a fashionable gloss for the latter.  "As the politeness of the French language has distinguished every glutton by the title of Bon Vivant," the author states, "and the courtesy of our own has honoured their beastly gluttony by the name of Good Living, the epicure thinks to eat and drink himself into your good opinion, and recommend himself to your esteem by an exquisite bill of fare."  Yet in many respects, the epicure was more sinful than the glutton, for he fetishized the biologically necessary act of eating.  By the end of the article, Mr Cramwell loses his appetite and lies in bed frantically perusing Hannah Glasse's popular cookery manual –– The Art of Cookery made Plain and Easy –– as a gastro-pornographic text, scanning recipes in hopes of reviving his limp and withered appetite.

For thousands of years, the communal meal has been conceived of as a fundamentally "sociable" activity.  Yet it appears that the entry of the foodie into metropolitan life turned ideas about "polite sociability" –– a traditional hallmark of 18th century culture –– upside down.
Posted by Unknown at 15:01 1 comment: