Check out this "map" detailing the gifting networks of the Thursday's Club call'd the Royal Philosophers, an elite dining club active in 18th century London.  Beginning in 1748, both members and benefactors presented various foods to the society –– from venison pies to "Aegyptian Lettuces," from Malaga Watermelons to West Indian turtles.

With some outside help, I was able to export all of the gifting data out of the club's dinner books and import it into Gephi, an open-source data visualization software.  The map you see below charts all gifts from 1748-1785.

Feeling overwhelmed?  How about a few close-ups?  As avid readers of this blog may know, the men of the Thursday's Club had a thing about venison.  So much so that in 1749, a rule was enacted entitling men who paid annuities "no less than a haunch" to be honorary members of the club.

By this map, we can see right away that the most popular gift by far was the "haunch of venison" followed by the 'neck' and the all-important pasty.  Apparently these guys viewed it as the most fail-safe gift to give.  Stately, aristocratic, yet still quintessentially 'English,' venison would always impress fellow diners ... and would offend nobody.  We can also easily see that venison was given by all kinds of people.  Notice all the grey lines of different widths extending outwards from the "hub" of venison givers and gifts.  All of those people were connected to giving venison in some way.

Sure, the most conspicuous venison donor was the extremely powerful Philip York, later to become the 2nd Earl of Hardwick (he sent a shipment every summer for decades) but that didn't stop others from joining in when they could afford it.  Moreover, Hardwick hardly ever benefitted from his own largesse ... he only shows up on the club attendance books a handful of times.  Gifting, for Hardwick, was a performance of patronage rather than of connoisseurship.

Some other edible gifts were a little more daring.  I've already mentioned Josiah Colebrooke, the club's diligent treasurer, in earlier posts.  Did I mention that he got in on the gifting action too? 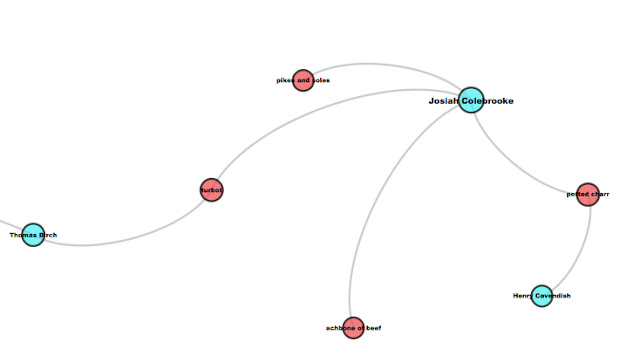 I am not yet qualified to comment on Colebrooke's angling skills, but the gifts he gave –– potted charr, 'pike and soles' and a turbot –– certainly made a different statement than did the haunches of venison.  Colebrooke was more closely allied with the middling sort –– he worked for a living, made it into the Society of Antiquaries and had enough leisure time to pursue his hobbies, such as coin collecting -– but he certainly wasn't trying to call attention to his fabulous wealth by these gifts.

What was he trying to do?  I'm not really sure.  And it's quite possible that I might be making too much of these gifts.  Whose to say that Colebrooke wasn't simply trying to get rid of the extra stuff in the kitchen before it went bad?  In many ways this map teases us, hinting at passing conversations, subconscious motivations, and unrealized ambitions that haven't, unfortunately, been preserved for posterity.  For all the unseen patterns and relationships within my data that Gephi is able to detect, the larger meaning of this map remains, for now, a mystery.
Posted by Unknown at 11:30 1 comment: