It's served to us in many different styles - some more palatable than others - but we can’t deny the surge of historical interest in food taking place over the past few years.  Drawing on various forms of expertise, food history seems to be one of the few topics to connect the world of investigative journalism to the ivory towers of academia.  We would expect that historians, perhaps, would gravitate towards broad processes –– such as the spread of industrialization that gave birth to the grocery store and the tin can, or the culinary impact of immigration and the rise of ‘counter-cuisine.’ We might expect journalists, on the other hand, to unmask more immediate concerns, such as the arduous journey from farm-to-table or the politics of GMO labeling, compelling us to think twice about what we select from our grocery store shelves.

But maybe our interests are more alike than we think.  The last two food history books I have read have grappled with several ancient yet still exigent issues in food history worthy of further exploration.  The first one, historian Dr. Emma Spary’s Eating the Enlightenment: Food and the Sciences in Paris 1670-1760 (University of Chicago Press, 2012) examines the animated debates about alimentary knowledge during the 18th century, ranging from the physiology of digestion to the chemistry of alcohol distillation.  The book is written with a specialist audience in mind: rewarding reading provided one reads with a pen in hand.  The second, Pulitzer Prize winning journalist Michael Moss’s Salt: Sugar, Fat: How the Food Giants Hooked Us (Random House, 2013), examines the understudied phenomenon of modern processed food and the political machinations of the industries that design and sell it.  The reading is as addicting as the Cheetos and Twinkies that he describes.  I picked these books up for very different reasons, but both, I think, raise important questions about our understandings of taste preferences, addiction, and the relationship between food and drug. 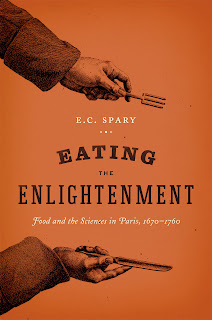 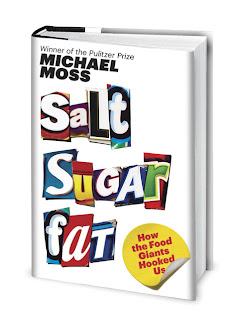 Straddling self-preservation and leisure, philosophers and physicians have long considered taste to be the most enigmatic sense.  The Roman Epicurean poet Lucretius posed the question in the first century B.C.

“Now, how it is we see some food for some,
Others for others …
I will unfold, or wheretofore what to some
Is foul and bitter, yet the same to others
Can seem delectable to eat?”

Drawing on the works of eminent French physicians and cooks, Spary examines the heated debates ignited by the rich, delectable flavors of fashionable nouvelle cuisine.  As culinary masterminds attempted to dazzle the palate with seasoned ragouts and fricassees, they also marketed gustatory enjoyment of them as a social virtue.  Over the first half of the 18th century, she argues, physicians anatomically linked a delicate palate attuned to culinary artistry and subtle flavors to a lucid and productive mind.

Spary’s physicians are essentially the ancestors of the food scientists today working at the Monell Chemical Senses Center, where the manufacture of gustatory delight is now a multi-billion dollar industry.  Moss invites us into this Wonka-like behemoth in Philadelphia, where chemists tinker with smell, taste, texture, and aesthetic appeal to design the cookie or soft-drink guaranteed to bring in the biggest profits.  I was particularly struck by the fact that heavy loads of salt, sugar, and fat do equally great wonders for texture as much as taste, making Wonder-Bread puffy, Cheetos crispy, and Lunchables chewy.  Indeed, seems like the processed food industry has whittled our flavor preferences down to a science. “People like a chip that snaps with about four pounds of pressure per square inch, no more or less,” one food scientist matter-of-factly reports, leaving me wondering whether the subjectivity of human taste preferences celebrates the individual as we like to think.

Likewise, the relationship between taste and habit formation is hardly new.  The famous 17th century physician Thomas Willis described the pleasure of eating tasty foods as a God-given reward for the monotonous and laborious act of eating necessary to keeping us, and the human race, alive.  (The same logic was also used to explain the pleasure of sex.)

Our understandings of habituation and addiction are quite different today.  As eating was necessary to human survival yet was also subject to the spontaneous grumblings of the stomach, “alimentary pleasure” Spary observes, “occupied a grey zone of permissible indulgence.”  So long as he could sublimate his appetite to his faculty of reason, the 18th century enlightened eater was permitted to enjoy the delights of haute cuisine.  But not everyone was capable of handling these gustatory pleasures.  The aspirational parvenu and the coarse country brute, unsurprisingly, were most at risk of getting carried away.  The 18th century science of addiction, Spary explains, therefore had little to do with the chemical composition of tasty foods themselves, but was enmeshed in the ideas of luxury, decadence, and indulgence that eating these foods presupposed.

The delicate 18th century ragout thus bore a striking resemblance to the taunting motto emblazoned on every bag of Lay’s potato chips: Betcha Can’t Eat Just One.  Moss, however, is less interested in the social forces informing the production of physiological knowledge, proudly standing by his oh-easy-to-hate culprits: salt, sugar, and fat.  It is the expert manipulation of these substances that induce people to inhale a bag of potato chips in one sitting and to (falsely) believe that their waistlines can get away with it.  I found Moss more compelling when he discusses the disingenuous tactics by which corporations have hooked populations on processed foods.  Virtually all of the food scientists he interviews –– the engineers of everything from Dr. Pepper to Lunchables –– do not dare touch the food that their employers unscrupulously market to our society’s most impoverished and vulnerable demographics.   When it comes to our habituation and addiction to the “wrong” foods, the forces of social distinction always seem to be at work.

Last, Spary and Moss both explore the relationship between food and medicine.  These distinctions are also thousands of years old.  In the 4th century B.C., Hippocrates exhorted us that every doctor should also be a good cook, as pleasant tasting food was easier to digest than nutritionally identical food that was perhaps less pleasing to the palate.  (Ayurveda and many other forms of alternative medicine are gaining interest in the West because they operate according to a similar logic, discussed in a previous post.  Spary shows us how the medical categories assigned to food –– whether they are “addictive” or “healthy,” “nourishing,” or even counted as food at all –– are highly unstable and are constantly evolving.  While today’s food scientists might balk at classifying coffee and liquor in one alimentary category, 18th century chemists believed the essential salts in both substances shared certain healthful medical properties –– “spiritual gasoline” –– that affected the brain and nerves in ways more alike than different.  Nutritional beliefs are shaped by far more than science alone, but also incorporate political, social, and cultural factors.

But does this apply to Tang and potato chips?  It might be hard to believe that processed food had ever been touted for its medical properties, but Moss warns us not to forget that the 1950’s “Golden Age” of food processing once signified the triumph of American progress and ingenuity.  Tang, for example, fortified with nutrients, was considered an effective and tasty solution to the high cost and limited accessibility to regular orange juice.  Today, however, the gurus of food processing are singing a different tune, as Moss learns during his trip to Nestlé’s research center in Switzerland.  Here, food scientists keep busy testing potential state-of-the-art alimentary solutions to the obesity problem.

The nature of their research, unfortunately, suggests that it might be too late.  We hear about new products like “Peptamen” ingested through a tube to feed the alarming numbers of men, women, and children that have undergone gastric bypass surgery to shrink their stomachs yet still can’t rein in their cravings for nutritionally devoid processed food.  Indeed, the new ‘science’ of medical nutrition seems to be suggesting that maintaining health and losing weight the old-fashioned way –– by eating –– might be a relic of a by-gone era.  This might be more serious than a capitulation to the obesity epidemic, bad as that sounds.  These new products suggest that the distinctions between food and medicine, which part ways during the 17th century, might now, in the 21st century, be drawing back together.

I picked up both of these books for very different reasons, and I enjoyed both of them tremendously, albeit in different ways.  Despite the differences in subject matter and approach, both of these books illuminate the messy political, social, and intellectual forces that inform our knowledge of food.  There is nothing inevitable, both books conclude, about the ways whereby our food decisions take shape.  But both of these books open new questions about our relationship to food –– about consumption, about agency, about the politics of alimentary knowledge –– that show us that there is far more research to be done.
Posted by Unknown at 10:47 1 comment: