Confessions of an English Turtle-Eater

In 1755, the weekly periodical The World published an “insider’s account” of an English turtle-feast.[1]  To call it unflattering would be an understatement; the piece viciously satirized the gastronomic obsession that had suddenly afflicted high society. 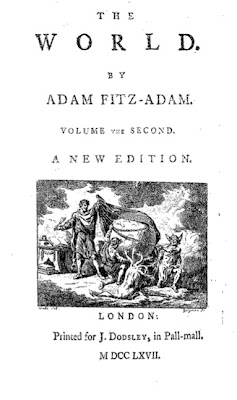 The World only ran for a few years, yet the two penny periodical reputedly had a high circulation.  Much of the content involved some sort of playful social critique intertwined with a moral lesson; the editor, Adam Fitz-Adam, attempted to be “witty when I can, and instructive when I dare.”[2]  Readers most likely would have treated the piece as entertainment more so than as investigative journalism.  But when there’s smoke, there’s fire; after all, separating fact and fiction was a far more ambiguous enterprise in those days.

What went down at a metropolitan turtle feast?  If you will remember from a few posts ago, back in 1744, when Lord Admiral George Anson’s scurvy ridden crew lay stranded off the coast of Panama, sharing fresh-caught turtle was described in glowing terms.  The meat was abundant and readily shared among all ranks of the crew.  Even the superstitious Spanish prisoners were encouraged to give it a try.  Sharing food together –– done with cheerful, convivial swagger –– turned a distant tropical island into a home away from home.  Ah yes.  The good old days.

By 1755, the party was over.  Or more accurately, turtle feasting had degenerated into an exclusive libertine bacchanal replete with fetishistic rites and rituals.  The uninitiated narrator watches the host of the turtle-feast carefully fold his turtle clothes around his body “like a nightgown,” alluding to the loose fitting Roman attire of Apicius’s day.[3]  Forks and knives are substituted for customized cutlery inventions –– “fine saws, chisels and instruments of different contrivance, as would have made a figure in the apparatus of an anatomist” –– designed to scrape the calipash dry.[4]  Finally, the turtles are treated more like sacrificial victims than food.  Turtle-shells –– “trophies of his luxury” –– adorn the gates of the host’s house.  Six turtles swim around a giant cistern erected in one of the rooms.  But instead of seaweed or algae, these naturally vegetarian creatures fatten in England on a leg of mutton per day.

There was certainly something a little cannibalistic about maintaining a sea turtle in England, but actually eating one, as we soon find out, turns men into figurative beasts.  “The plunderers were sensible to no call but their own appetites,” the narrator observes; they ate with “eagerness” and “rapacity,” trying to stuff their faces with the best parts before the rest of the company could get to them.  The formerly gracious host, meanwhile, has “taken care of nobody but himself.”[5]

The more brutish the men appear, the more we as readers are invited to sympathize with the plight of the poor turtle.  For example, the young initiate recoils in shock when he first glimpses the enormous turtle lying in the kitchen, still alive despite having been “cut and two full twenty hours.”  Things go from bad to worse when a “jolly negro wench” appears out of nowhere and callously sprinkles a handful of salt over its body, provoking “such violent convulsions, that [the narrator] was no longer able to look upon a scene of so much horror and ran shuddering out of the kitchen.”  We learn that hundreds of innocent turtles are violently killed during the arduous reptilian middle passage from the West Indies, their shells dashed against one another during storms.  It’s hard to see the turtle’s plight as disconnected from the slave’s.[6]

What should we make of this literary representation of turtle feasting?  In my opinion, mid-century obsessions with turtle feasts underscored widespread cultural anxieties about foodism.  They warn us that knowledge and appreciation of fine food does not prime people to appreciate the finer things in life.  Instead, all notions of civility go out the window.

In fact, turtle eating was often talked about as if it were an addiction.  After a bad day in the stock market, one fictional stockbroker finds temporary solace in a turtle seasoned with cayenne pepper, which “operated so strongly, that his heart was dilated, his spirits were exhilarated…”[7] It's likened to a mind-altering substance rather than a meal.  When it came to the turtle overdoses, satirists had a field day.  In George Lyttleton’s Dialogues of the Dead, an historical foodie Charles Darteneuf fantasizes about coming back to life simply to taste green turtle fat, pledging “to kill myself by the Quantity of it I would eat before the next morning.”[8]

Eating turtle effectively turns back the clock on the civilizing process, but it also called into question what counted as food.  Now, during the 18th century, the jury was out when it came to the exact flavor of turtle.  Some argued that it tasted like beef; others posited that it the flavor was closer to veal or lobster.[9]  Still others found it utterly disgusting.

But if turtle wasn’t universally accepted as food, its skyrocketing popularity raised some red flags.  Turtle was more than just an acquired taste imported from abroad; it opened up a Pandora’s box full of limitless gastronomic possibilities that threatened to destroy the bonds of a common culture.  No longer were men satisfied with the roast beef of old England at their feasts; in the sea turtle, nativists suspected a “conspiracy of Creolian epicures to banish [roast beef] from the island.”[10]  And if sea turtle could so easily become a culinary rage, who was to say that the English palate couldn’t be reconciled to an alligator?  How could tradition survive within a relentless quest for novelty?

With all this bad press, turtle risked losing its status as a delicacy.

[1] If you’d like to read it yourself, the article is called “A Humourous Account of a Turtle Feast and a Turtle Eater,” in The World 123, May 8, 1755.
[2] Fore more on The World, see Patricia Demers "Sir Edward Moore" Oxford Dictionary of National Biography, online edn, Jan 2008.
[3] Apicius was the Roman bon-vivant who lived in the 1st century BC.  In 1705 F.R.S. and antiquarian Martin Lister edited and privately printed a cookbook supposedly authored by him, sparking off vigorous debates among intellectuals about what kinds of foods Britons should be eating.  His name became associated with insatiable gluttony and love of luxury during the 18th century.
[4] Did “turtle clothes” actually exist?  I have yet to find any evidence of real turtle eating uniform.  Most likely this simply meant loose-fitting clothes.  The only other reference I have found comes from “A Scene of Shades” published in the General Evening Post, October 11, 1770.  This article tells the story of fictional “Common Councilman Guzzledown” who announces “because I knew there was to be a great deal of turtle, I put on my light drab frock and gold-laced scarlet waistcoat that laces down the back.” If you are a textile historian with any knowledge of 18th century turtle-clothes, please get in touch!
[5] This account isn't the only turtle-feast to turn men into ravaging monsters with no sense of hospitality.  In 1770, a disappointed guest at a corporation dinner wrote an angry letter to the General Evening Post, reporting that entire tables received only empty platters and empty turtle shells because the people served first had eaten it all.
[6] I’ve always wondered if there is a critique of the slave trade hidden in this indictment of turtle feasting.  Fitz-Adam reconstructs a topsy-turvy world where reptiles seem more human than men.  And after all, it’s hard to deny that the turtle’s body seems to symbolize a failed economic and moral system associated with the West Indies.  In 1755, these kind of critiques were ahead of their time.
[7] John Hall Stevenson, Yorick's Sentimental Journey, continued vol 2, (London, 1774) 27.
[8] George Lyttelton, Dialogues of the Dead (London, 1760).  Darteneuf actually existed; he was a member of the Kit Kat club and died before turtle-eating had penetrated Great Britain.  You can find out more about him in Philip Carter's article "Charles Dartiquenave," Oxford Dictionary of Nationanl Biography, online edn, Jan, 2008.
[9]  The only reference to turtle's resemblance to veal and lobster comes from James McWilliam's A Revolution in Eating (New York: Columbia University Press, 2005) who references Richard Bradley, a gentleman traveling in Barbados during the 18th century and found it "extremely pleasant either roasted or baked."  Many contemporaries believed that turtle tasted fresher and better in the West Indies.
[10]  Adam Fitz-Adam, The World, June 5, 1755, 115-120.